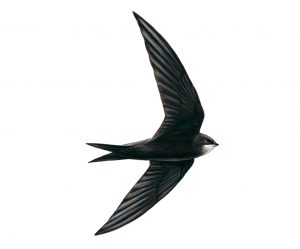 Swifts are dark brown with distinctive crescent shape wings and are often seen screaming around the Town Steps at  dusk. Feeding, sleeping & mating ‘on the wing’, Swifts NEVER land except to nest and raise their young

They arrive in the UK in May and stay for just three months, nesting OUT OF SIGHT in spaces under roof tiles, in church towers and nest boxes

Swifts have tiny feet and cannot perch, are insect eaters and, in level flight, are the fastest birds on the planet Arriving in April with the Swallows, they often land on the ground to collect mud for their nests which they build under eaves on the OUTSIDE of buildings

Images reproduced with the kind permission of the RSPB © Mike Langman